Hailing from Wisconsin originally, Nicholas Lemke is the reigning New Mexico State Champion and a top-10 finisher in the stacked “baby-Masters” Nationals category. Originally a mountain biker during his high school grease monkey days, Nick has married his MTB skills with some road fitness to pursue cyclocross glory. He’ll be aiming to repeat as NM State Champ in 2014/2015, as well as podium in the young-old-guys’ race at Nationals, knock some heads around in the top 25 of Elite Nats, and wreak as much havoc on Southwest ’cross races as possible.

Working as a researcher in schizophrenia and other psychiatric disorders during the week, Nick will fly the HiFi banner for cyclocross in 2014/2015. Nick will be racing the Extended Play 39mm carbon tubulars and MixMaster aluminum tubulars. You’ll find Nick at the following UCI races during the upcoming season: Boulder Cup, Trek CXC Cup, Cincy 3, Jingle Cross, CXLA, NBX Gran Prix, Kingsport Cup and Nationals!

Check out more from Nick on his super-cool blog: Blitzencracker! 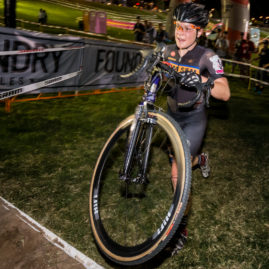